When his previous owners noticed a pup had hair growing from his eye, they were planning to put Frankie down. But thankfully, God sent special angel Tracy Smith just in time to save the poor pup from this awful fate!
Vets don’t know the reason why, but little Frankie, a Jack Russell and Papillon mix, has tufts of hair growing from each eye. The farm where he was born did want him because of this unique trait.

The owners saw Frankie as useless. They assumed he couldn’t help around the farm and figured no one else would want him for a pet. So, they were planning to have him put down.

But God made sure Tracy Smith showed up before the farm had the chance!

Pup With Hair Growing From Eye

Tracy Smith delivers parts for the garage where she works. She was making a routine run to the farm one day when saw something out of the ordinary.

“Usually, I just leave the parts and go,” she explained. “But I saw these little bundles of fluff running around so I had a quick look.”

As it turns out, this was no ordinary delivery. God was making sure the right person was in the right place to save Frankie.

Tracy Smith loves dogs, so she struck up a conversation with the farmhand about the litter. She wanted to know the reason after he mentioned to her how one of the pups was going to be put down.

“I was told that because he was blind and he couldn’t be used on the farm or be sold as a pet,” she recalled.
But Tracy wasn’t so sure. While the pup did indeed have hair growing from his eye, he ran around playing like all the others. She suspected the unwanted pup wasn’t actually blind.

The farmhand picked up on Tracy’s interest in Frankie and said she could have him. So, instead of heading over the rainbow bridge, the adorable dog found himself headed to a loving home!

A Happy Life For This Unique Pup

At first, the vet suggested Tracy treat Frankie as though he was blind by moving things out of the way. But even with hair growing from each eye, Frankie’s behavior suggested he could see at least some things.

“When I started taking him for walks I’d let him off the lead and I found that he would run around the field just fine,” Tracy said. 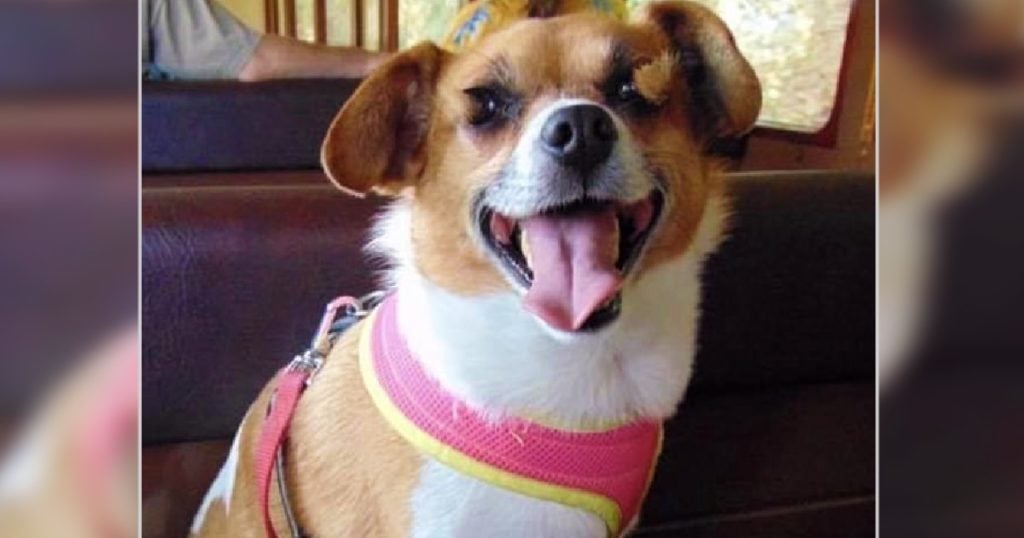 She brought this up with the vet at a follow-up appointment. The vet took a closer look and discovered that while Frankie certainly doesn’t have perfect vision, he can see a bit out of both each eye.

The vet doesn’t know the reason for this bizarre condition but guesses Frankie may have two cysts behind his eyes that somehow causes the hair to grow out. But Frankie isn’t in any pain, even with hair growing from the eye.
Tracy has absolutely no regrets about rescuing this unwanted dog. He may look a little different but is just as loving and loyal as anyone could hope for.

“Frankie is the best dog you could ever have,” Tracy Smith says. “He’s so well-natured, happy, lovely, and obedient – he’s like my little shadow.”

“I feel really good about saving him from being put down,” Tracy says. “Because the way I look at him now it would have been such a waste because he’s such a loving dog.”